"Officers from Counter Terrorism Policing South East have been working closely with Thames Valley Police's Major Crime Department throughout the night," the counter-terrorism police said in a statement. 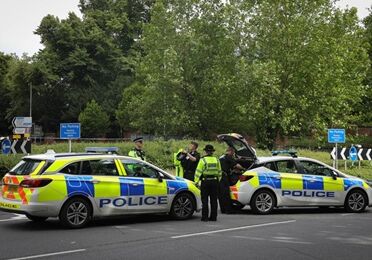 Three people were killed and at least three others were injured in the attack at Forbury Gardens in Reading on Saturday night. A 25-year-old man from Reading was arrested on suspicion of murder after being detained at the scene, said local police.

The BBC reported Sunday that the 25-year-old is named Khairi Saadallah and is "originally from Libya."

Police said they are not looking for anyone else over the incident.

British Prime Minister Boris Johnson said he was "appalled and sickened" by the attack and praised the bravery of the unarmed officers who arrested the suspect.

In a statement, Chief Constable John Campbell of Thames Valley Police said that police cordons continue to be in place and are likely to be for some time as counter-terrorism police officers work further to investigate the incident and establish exactly what happened.

He added that there was not believed to be a wider risk to the public and there was nothing to suggest anyone else was involved in the attack.